BGC 11: The House Without Sarah, Mimi and Theresa…Barbies, Wolves and Some Stupid Ass Dorm Room Pranks

Ok so Sarah, Mimi and Theresa got kicked off.  I was going to wait a couple of episodes to give the new house dynamic a fair shake.

So the five girls who hated Sarah basically just hate the two new girls…and follow each other around in probably one of the most boring half-dressed gangs (ehem, wolf pack) ever…

All they do is eat and talk shit.

Here they are eating and talking shit in the kitchen:

No one can tell this is a bottle of Coke because I put electrical tape over the middle of the label…dear Oxygen meet packaging as brand identity.

Here they are eating and talking shit in the living room:

Oh, and when the five of them decided to finally stop talking shit and do something…this is what they settled on:

——–>>>Nothin’ like going through all the trouble of buying and sneaking a baby monitor into Janelle and Andrea’s room only to find out THEY’RE NOT TALKING ABOUT YOU…. That’s almost worse than them actually talking shit…HA! 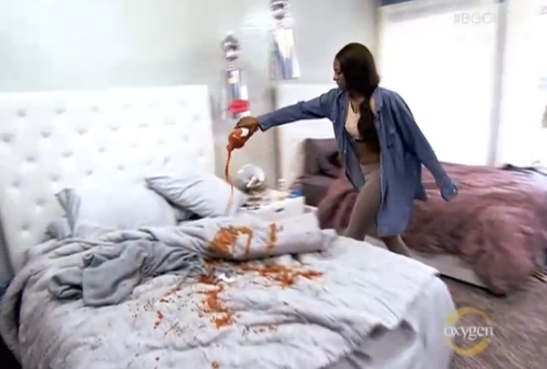 Really, you’re not even going to take the sheets off first? C’mon.

I feel like once a week I’m watching the feed of a hacked laptop webcam on the second floor of some random overpriced collegiate dorm.

I’m sorry, I thought this was the BAD GIRLS CLUB…not season 100 of BIG BROTHER…

Now Janelle and Andrea put dirt in the hyena girls’ makeup…that shit’s hilarious.  You know why?  It’s devious as fuck and they’ll NEVER find out unless someone confesses…

“Black Barbie White Barbie” Making the best of a typical situation, Janelle and Andrea team up to have fun.

Why they hate Janelle: Did she really pop Gigi from behind?

Gigi was popping off in Janelle’s face for no reason…with big ass dangly earrings on and her hair down…halfway through the argument she realized she was ill  equipped to defend herself if Janelle decided to cash that cheque.

Popping from behind isn’t cool but when the person’s clearly prepping for a fight what are you going to do?  Wait for them to come at you or strike when you have the advantage?

“They gettin’ me drunk son!” ~Gina aka “Gigi” …damn I thought this chick was going to be so chill…I hope she redeems herself from the mob mentality before the end.

I don’t think Gigi was walking away, she turned her back to prep for a fight assuming Janelle wouldn’t hit her from behind.  Gigi chose poorly, she should have never started shit unprepared to begin with…

Of course they hated her before this incident, I think it has more to do with her being a tall, thin shade thrower (hair whipping Jazmone) and that the Gigi thing just gave them an excuse to look less bad for ganging up on Janelle.

Why they hate Andrea

Andrea took a stand against the hyena girls ganging up on Janelle.  Everyone hated her the moment she walked in the door because surprise, she’s tall and thin.  I’m not making that up, they actually said it:

“Blonde hair, slim, pink dress, definitely Becky…”Becky” is just a name that I give white girls that look like her.” ~Jazmone

What if Andrea said about Jazmone: “long weave, big butt, tight jeans, definitely Shaniqua…”Shaniqua” is just a name that I give black girls that look like her.” 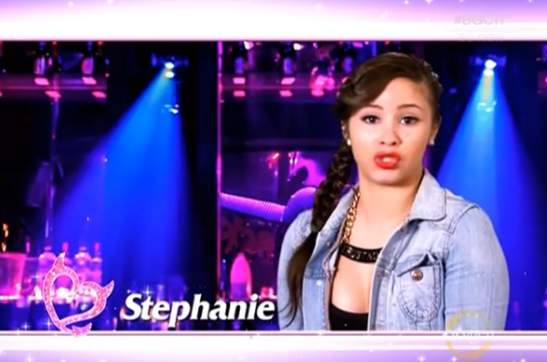 “She’s too tall, I can’t even look at her too long, my neck start hurt-in” ~Stephanie

I think if these girls gave Andrea a chance they might have more fun.

…now it looks like everyone’s turning on Shanae because she’s a shit talker.

Not really sure what she did to stand out as a shit talker amongst shit talkers…but it’s becoming clear that Andrea and Janelle are avoiding the hyenas so they’ve got to find a new target now.

Basic normal girl gang crap…the target stops responding and the only thing keeping them together is conflict…so instead of chilling out and being cool they search for a new target, even if the only source must come from within the group.

IN short, girl gangs are cannibalistic.  Actually, cannibalism might make this show more interesting.  Instead of Chicago they should film Season 12 on Donner Lake…