Looks like Jody’s little plan of having Amanda join the cast to be Ronnie’s best sober filming friend has backfired!  Amanda seems like an absolute puppet and is quite rude without provocation.  She’s done a pretty good job of alienating herself from the other ladies and we’re only a couple of episodes in!

Amanda made some pretty stereotypical comments about Ioulia and her husband given the fact that she is an attractive young woman of Russian descent and the age gap between her and her husband.  This didn’t sit well with Lady Ronnie Negus.

On to Vancouver Gay Pride!

1.  Amanda vs Robin: something about alcoholism and the sequined dress:

…wtf was that mess about the sequin dresses.  Robin Reichmann bought a dress at Jody Claman’s store, after advising Amanda Hansen that she was looking at a similar dress, Robin left the store.

Amanda, in true passive aggressive form, bought the dress anyway and wore it to the SAME EVENT.  Robin wore it better.  Amanda just looks like a bad extra from Carrie…the 1980’s version (which is sad ’cause Amanda’s massively younger than Robin…).  Anyway…

Ok.  I must say this is another reason I doubt Jody’s business acumen…

IDK, as a businesswoman I think I’d discourage my daughter’s friend from intentionally trying to make my new friend (and customer!) feel uncomfortable in a dress bought at MY STORE…but /meh.  To each her own I guess. 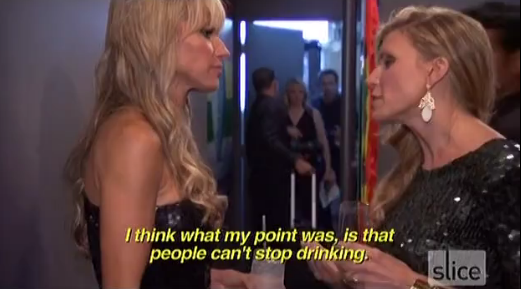 I pegged Amanda Hansen as Jody’s minion from the moment she said she was Mia’s friend…but now she just looks boring as fuck running around after Jody picking up her scraps.

She’s got way too much to prove and she’s so far up Jody’s ass I should start calling her Lemmywinks.

…it’s a long and treacherous journey, hopefully Amanda finds her way out of Jody’s ass before she bores viewers to death.

I love Ioulia, if you throw her shade she undermines you by being a fabulous attention whore.  See, there’s annoying attention whores and then there’s masters of the trade.  She’s so good at it I can’t help but admire her skill.  Ioulia Reynolds has that magnetic charisma that lights up the room

Ioulia will smile and nod but she’s smarter than half this cast combined.  Go Ioulia!!!!!  I just hope she’s smart enough not to become Jody’s lap-dog because the whole ‘ask Mary why she’s here’ thing at the Gay Pride party was beyond high school.

3.  Was it really Jody’s private “event” that Mary crashed or just a party she attended that Mary was also invited to…

It looked more like Jody invited some friends to a bar that was having a party to celebrate the parade…and tried to act like she was throwing the whole party when in reality her group was just one of many in the bar.

Really, Jody, you personally invited all these people to the party? Because it looks like they walked in during the parade for a drink…

The whole episode it was obvious that the bar was open and people were coming in and out.  Jody and her group came in the back door and hung out at the back by the wall the whole time. 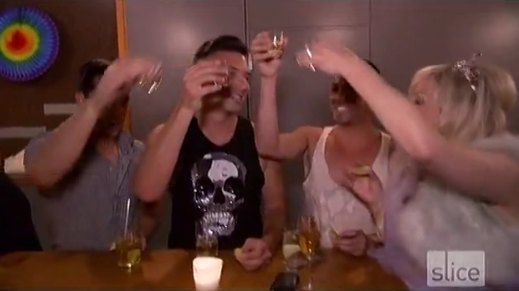 I don’t know about you but if I was hosting a private party at a bar don’t you think I’d be at the CENTER of the action?  Or if I hated someone as much as Jody hates Mary don’t you think I think I’d have a GUEST LIST?  Lol.  Come on.

Jody may have dressed the part but who ever heard of hosting a party from the back of the bar by the wall?  Seriously.