Phaedra’s come a long way from lying about her date of conception to insinuate that she didn’t get knocked up before her wedding…and I’m really loving her fabulousness!

“DONKEY BOOTY is just a nice, firm, round behind.”

…her ass all day.  It really is quite an amazingly organic work of art.  I love her for her CLOTHED sensuality.  It’s so fucking hot I die!

Phaedra’s way of speaking has taken on a new form and I like it!  She pauses, stares at the camera and is just so bloody cute.  Her monologues are beginning to remind me somewhat of my Great-Grandmother, who never used profanity but ALWAYS got her point accross.  My Great-Grandmother was a living example that realness and fierceness were not mutually inclusive of loudness, rudeness and vulgarity.

That being said, I’m pretty confident that my Great-Grandmother neither talked about nor played with her derriere in the kitchen with a camera crew present. 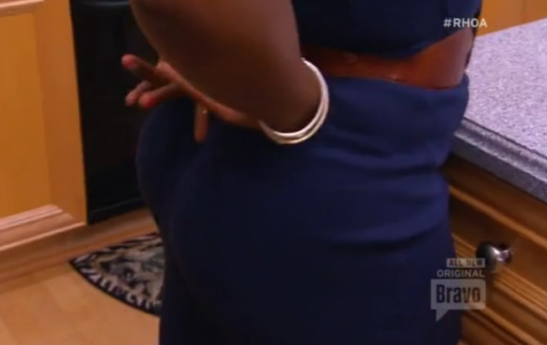 So, for those of you who don’t know, this is what you can hope to achieve if you purchase and adhere to the regime promoted by Miss Phaedra’s Phucking Phantastic Donkey Booty Workout Video (working title only, just kidding).

“For women who were not born with a bountiful bottom my husband and I are going to be doing a fitness video that is going to have butt lifting and butt plumping properties to give you that curvaceous bottom that you dream of.”

1. because I wholeheartedly support this cause

2. None of the seam allowances on my winter wools would support a tailor’s attempt to accomodate an amazing Donkey Booty.

I love how she was like, “Oh I thought I was ‘Faketra’…”  Being rich and famous isn’t going to get Phaedra to forgive Nene unless the latter offers a proper apology.